Balor was the God of the Sea and the leader of the Fomorians.  He had a third eye that killed all its path.  It was prophesied that Balor’s grandson will kill him, so he locked his daughter up on Tory island.  But the god Cian was able to reach her and she bore three sons.  Balor cast all three boys into the sea but Cian wass able to save one: Lugh,  who grows up to be the leader of the Tuatha de Danann at war with the Fomorians.

Lugh, Balor’s grandson, kills Balor during a battle by shooting a spear into his open eye so hard that it turns the eye to the back of his head killing the Fomorian army instead of the Tuatha de Danann. 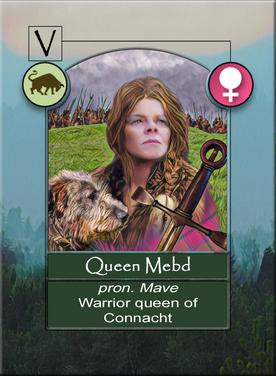 Born Setanta, the son of the god Lug, his name is changed to Cu Chulainn after killing Culann’s fierce guard dog when only a child.  He continues to train and becomes a great warrior with many legendary stories in his wake.

The most famous is of his battle for the Brown Bull of Cooley against Queen Mebd’s warrior Fergus, also Cu Cullain’s best friend and foster brother.  They fight for three days and in the evenings heal each other’s wounds.  In the end Cu Chulainn is forced to kill his best friend and is victorious over Queen Mebd’s army. 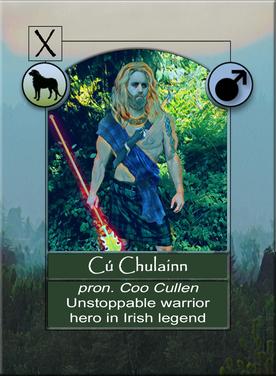 Lord Lir remarried Aoife, after his wife died, a beautiful sorceress and daughter to the king.  At first Aoife loved his four children, but soon became jealous of the love and attention they received from Lord Lir, their father.

The children loved to swim and Aoife took them to a lake where she cast a spell on the children.  Because they were immortal, she could not kill them.  Instead she cursed them into becoming beautiful swans, the curse only lifted by the bell of a new god in Ireland.

For 900 years the children were swans the bell of a new god, brought by St. Patrick, rang.  The swans became human but aged rapidly.  Quickly they were baptized and then perished.

Queen Mebd was the powerful and seductive ruler of Connacht.  She had three husbands all of whom became king only because she was queen. One of her most famous stories is the Cattle Raid of Cooley where she goes to prove she is equal to her husband in wealth.

Queen Mebd had many enemies, one in particular, her nephew Furbaide, blamed her for killing his mother  He practiced with his sling across the water from where the Queen bathed and, when he was skilled enough, killed her.

According to legend, Queen Mebd was buried standing up in the 40' high stone cairn on the summit of Knocknara in County Sligo, facing her enemies in Ulster even in death. 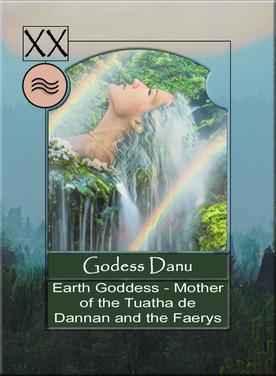 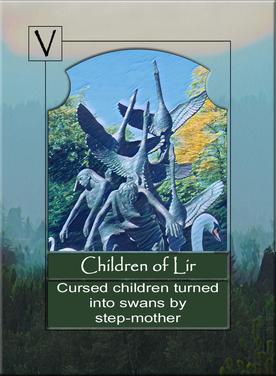 One of the most ancient of Celtic Deities, Danu is the Great Mother of Ireland.  She is the goddess of fertility, bounty, plenty, prosperity, wind, rivers, water, wells, wisdom and inspiration.

The Tuatha de Danann descended from her.  They were seen as gods, so advanced was their science.  The Tuatha de Danann defeated the native Fir Bolg but a few centuries later were defeated themselves by the Milesians.  They had a choice: leave Ireland altogether or retreat to the underground of Ireland.  They chose to stay and became the faery folk we know of today, retaining their magic from the Goddess Danu. 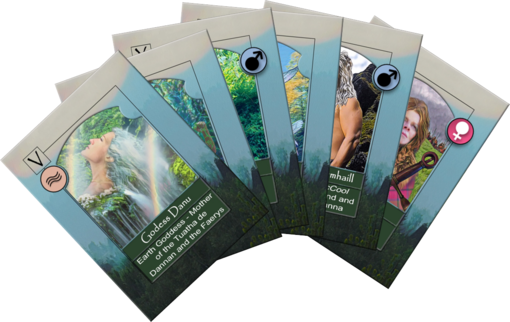 Fionn was born in secret and raised by a woman who taught him the arts of war and hunting. In his youth he met a druid near the River Boyne and studied under him.  During this time, he accidently ate of the Salmon of Knowledge and gained all the knowledge in the world.

Fionn arrived at the Hill of Tara at Samhain.  A fire breathing man of the Sidhe would lull all the men to sleep then burn down the palace.  Fionn stayed awake by touching his magically hot spear to his forehead then killed the Sidhe with the spear.  The Fianna, a military order in service to the high king, recognized Fionn as his father’s son and Fionn took over the leadership of the Fianna continuing to achieve legendary deeds and create many mythical stories. 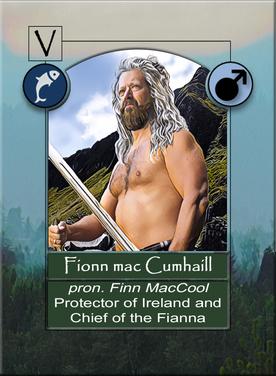 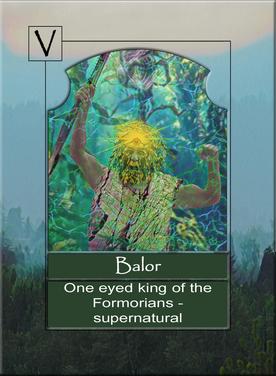