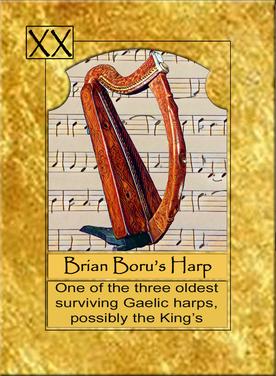 The Lismore Crozier was discovered in a blocked-up doorway at Lismore Castle, in the early 1800’s and crafted between 1090-1113 AD. It was made by Neachtain for the Bishop of Lismore, and highly decorated with copper, bronze, and studs of glass.

Most croziers in Ireland were shaped like shepherd’s crooks.  Bishops were given a crozier during ordination and abbots at their blessing, symbolizing the shepherding of the monastic community.

Originally an abbey in 635 and then monastery, Lismore Castle changed from a spiritual center to a private residence by the 16th century.  An attack in 1645 by Cromwellian forces seriously damaged it and then changed hands by marriage to the Dukes of Devonshire, who still own it today. 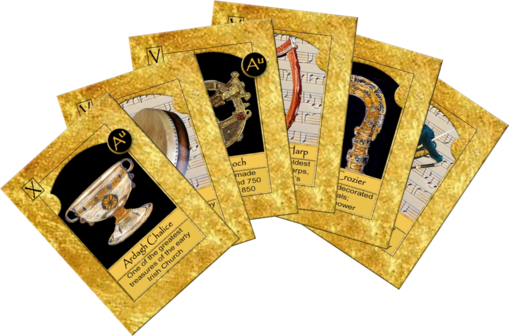 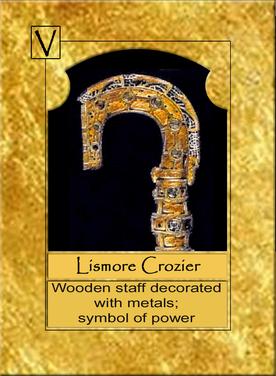 Uillean pipes are the characteristic national bagpipes of Ireland. It is played by pressing the elbow against a set of bellows tried around the waist. The air then passes through the pipes to produce sound. It has a sweeter, softer sound than the Great Scottish bagpipes used on the battlefield. It also has a broader range of notes and can even play chords under a skillful player.

The first bagpipes of Ireland are referred to in the Brehon Laws and were a mouth blown peasant instrument. In the 17th century the more modern bellows-blown pipes were becoming popular among the upper and middle class.  Over the next hundred years the Uillean pipes would grow in complexity and use becoming perhaps the most sophisticated form of bagpipes in the world.

Its predecessor dating back the 1600’s, the Bodhran of today evolved in the mid-19th century. The Bodhran is an Irish drum historically made from goatskin stretched and tacked over a circle of bent wood. It is very similar to a tambourine without the jingles. It is played by placing one hand on the underside of the drum and pressings hand in various parts of the skin to change the pitch of the sound. The top of the bodhran is beat with a short, double-headed stick called a bone or a tipper.

The Bodhran gained popularity in the 1960’s when Irish traditional music made a resurgence and is now internationally known. 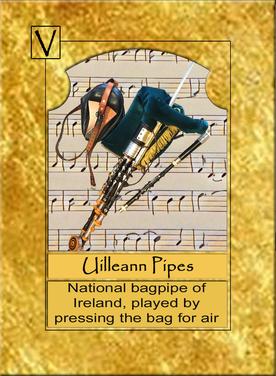 One day two young men were digging potatoes in the village of Ardagh, Co Limerick when they came upon a hoard of treasure: four brooches and a stemmed cup inside, what is now known as, the Ardagh Chalice.  The hoard dates back to the 8th century AD, most likely buried during the Viking times and very quickly for there was only a slab of rock on top to protect them.  The owners never came back for the treasure.

And what a treasure it was!  The skill level in its construction and decoration are uncommon during this time period, including gold, silver, bronze, brass, copper and lead.  There are intricate designs and inscriptions within it. The chalice now has a new home at the national museum in Dublin​ ​ 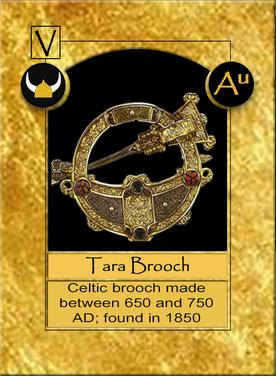 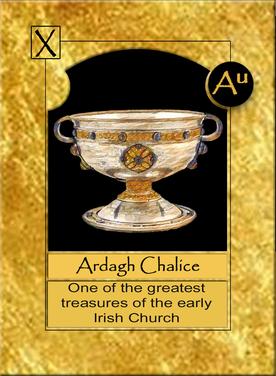 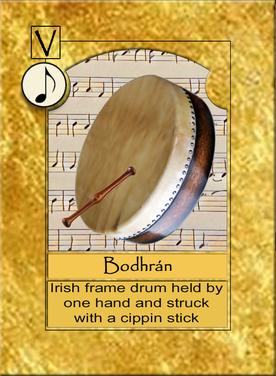 The Tara Brooch dates back to 700 AD and is one of the most intricate and detailed Celtic brooches known to be in existence.  The brooch has panels on both front and back (although some have been lost) and even the pin has gold filigree.  There are no Christian symbols on the brooch, but it does include more than 20 representations of dragons and serpents, along with knot work.

Found near the seashore of Bettystown, Co Meath in 1850 by two boys, the mother sold it to a watchmaker who then sold it to Waterhouse Jewelers.   The jeweler named it the Tara Brooch to create more of a stir and so it is still named.

Although associated with Brian Boru and named for him, the harp actually only dates back to Medieval times while Brian Boru died in 1014.  So, the legend of Brian’s son giving the harp to the pope must be erroneous.   It is not known for sure the journey Brian Boru’s harp made, but it is thought to have been given to King Henry VIII of England in 1521 by Pope Leo, changed hands a number of times, and eventually presented to Trinity College in 1782 where it resides to this day.

The Harp, as the official emblem of Ireland, appears on the Presidential seal, every Irish passport, and has appeared on Irish coins since King Henry VIII’s time. The harp is the national symbol of Ireland..