The Irish used many types of swords, never staying loyal to any specific kind.  They took advantage of new weaponry whether bought or looted.  The wealthier Irish adorned their sword hilts with gold and gems.  More common was to set the hilts with the teeth of large sea-animals.

A regular sword was called a cloidem (cleeve), with very large swords called a cloidem-more (like the modern-day claymore).  Many warriors practiced with both hands and many slept with their swords.  Short swords and daggers were also very common called scian (skean) which means “knife”.​ ​

The first known Viking raid on the island of Ireland occurred in 795 AD on the north eastern coast.  For the next few decades the Vikings would raid coastal settlements and monasteries and return to Scandinavia.

The winter of 840-841 AD saw the Vikings settle in Ireland at Lough Neagh.  The following year the Vikings settled in what is now known as Dublin, Cork, and Waterford.  For the next two hundred years, the Irish and Vikings would battle with both sides victorious and defeated in turns.  It was in 999 AD that Brian Boru defeated the Vikings in Dublin, ending their rule.

Although the high kings of Ireland had pledged fealty to England with the treaty of Windsor in 1175, Irish Kings continued to rule Ireland and fight the spread of the Normans.  In the next 500 years, only two English kings would set foot in Ireland.  In 1649 all of this would change.

Under the command of Oliver Cromwell, the English brutally invaded Ireland, killing many and confiscating land from the Irish through conquest.  In 1652 the Act for the Settlement of Ireland was passed stripping the lands from the Irish for rebelling against England. It became illegal for Catholics to own land and most all the Irish were Catholic.  The lands were given to the “Adventurers,” financiers to Parliament.  These new owners became known as “Planters.” 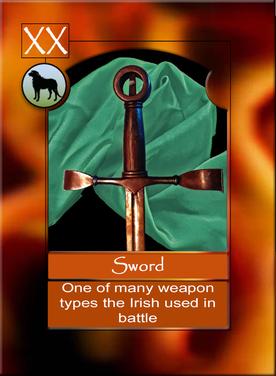 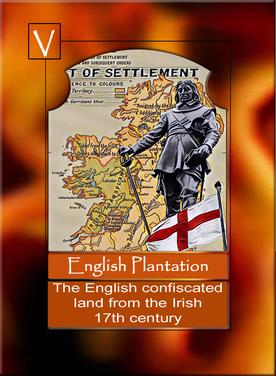 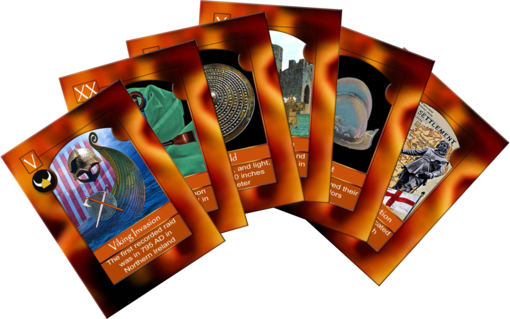 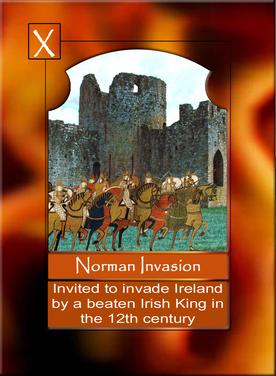 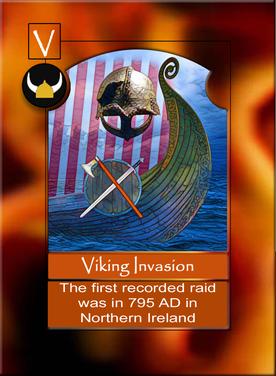 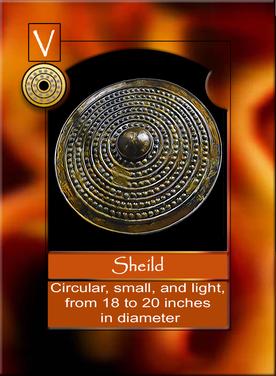 Irish wore helmets but the exact type in ancient times is hard to know.  It was called a cathbharr (caffār) meaning “battle-top” and many were crested and decorated.  There are many texts referring to them but no trace of ancient helmets has been found.  More modern helmets were made completely from either iron or brass.

There is a long history if the Irish using shields in battle.  The most ancient ones were make of wider-work covered in hides.  They were quite large, oval shaped, and covered the entire body.  This first shield was called a sciath (skee-a) and became the name for all types of shields.

Later shields were round and smaller about 18-20 inches in diameter.  Most were made of wood or hide covered, only a few made of bronze.  Many were decorated uniquely with studs or figures of animals. Hide covered shields were often times whitened with lime or chalk and the dried powder would create a white cloud of dust when hit. 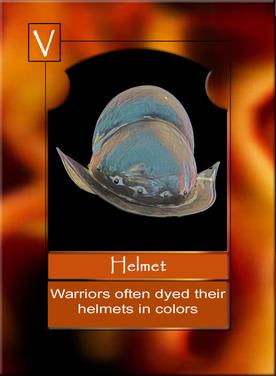 It was by invitation by a defeated Irish King that the Normans were able to successfully invade Ireland.   The Irish King of Leinster, Diarmait Mac Muchada, was stripped of his kingdom by the High King of Ireland.  Mac Muchada turned to the King of England to help and was given permission to rally troops if he could.  Mac Muchada made an alliance with the 2nd Earl of Pembroke, later known as Strongbow, a Norman, by promising him land and the marriage to his Irish daughter.

In 1170, AD Strongbow arrived in Ireland.  With troops and advanced weaponry from Europe, he began defeating the Irish kings. Even though the English King would arrive to try and create order, the Normans continued to carve out more and more Irish land by conquest.